One of the last real contrarian investments on this planet?

1. Many industrial use cases but trading way below its 1980 highs

The price for one ounce of silver currently sits around 16.75 USD. Since its last important high at 21.15 USD in July 2016 the price is down 21% and seems to be caught in a corrective pattern. While gold has been more or less acting quite constructive over the last couple of weeks and basically performed pretty well since its low at 1,045 USD in December 2015, silver obviously is lagging and without a doubt disappointing.

Considering that it is trading way below its 1980 highs at 50.00 USD and has only once challenged this number in May 2011 it is not presumptuous to say that silver probably remains one of the few real contrarian investments on this planet. Especially if you consider the E-Mobility boom and the fact that our digital societies depend heavily on electricity and therefore on conductive metals like silver, copper, aluminium, cobalt and lithium. Silver has many unique and excelling features and should therefore certainly be needed in the coming decades. Especially this is true for the photographic (x-rays), photovoltaic (solar) and medical (antibacterial) industry.

But as a matter of fact current pricing is not reflecting this positive fundamental outlook at all. Instead the inflation sensitive precious metal silver has put many of his investors into a deep state of depression. While you generally find around nine ounces of silver for every ounce of gold in the ground the gold/silver-ratio sits at a longterm high above 80 signaling that there actually is no bull-market in precious metals but that at the same time silver might be heavily undervalued…. 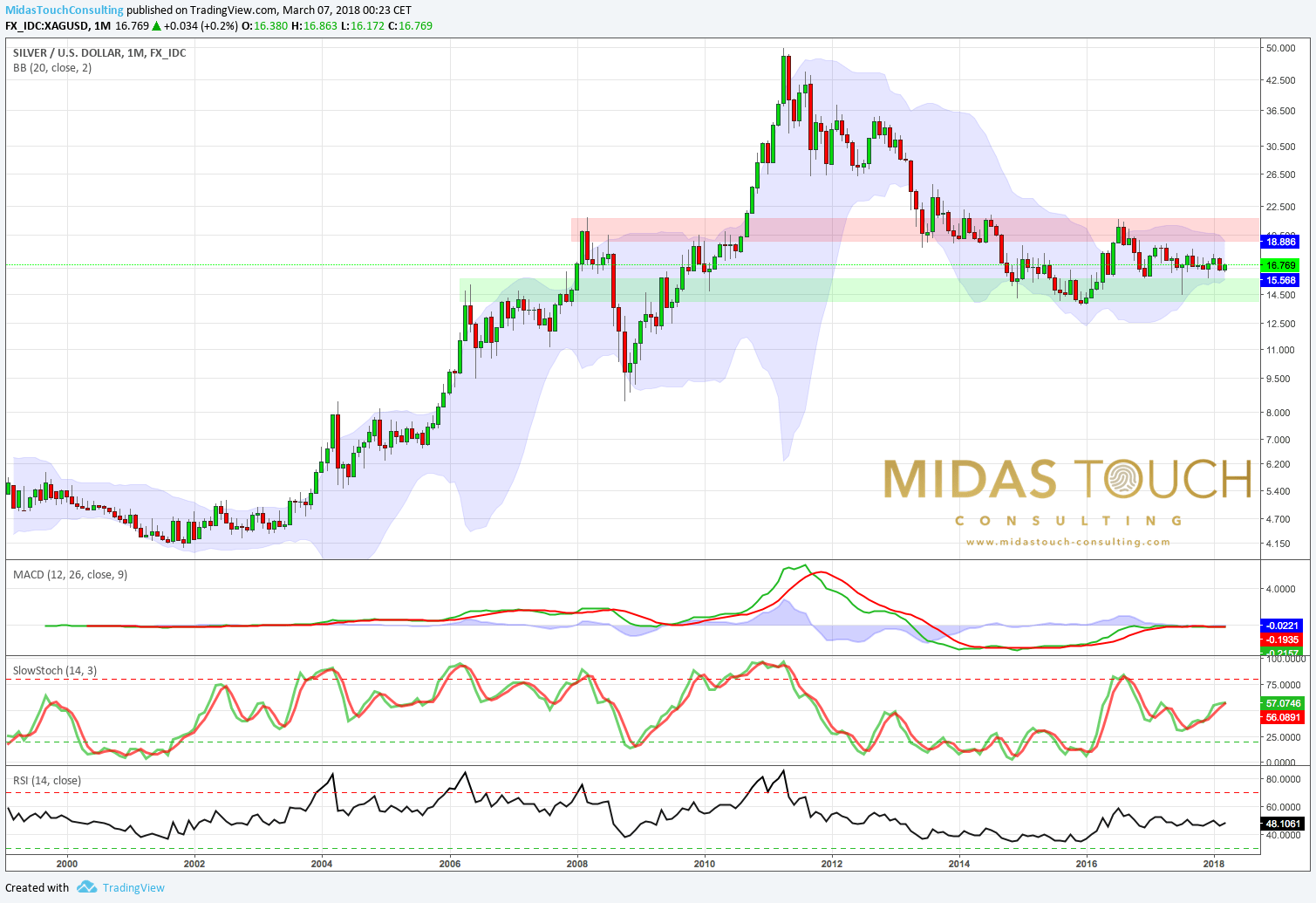 The monthly chart captures the last 18 years in the silver market. Since its top in May 2011 at 50.00 USD silver went through a long and severe correction. The final low (so far) has been reached in mid of December 2015 at 13.62 USD. From those extremely oversold levels silver posted a bounce up to  21.15 USD during the first half of 2016. This has been the last time that silver showed some strength as it has since then gone through another correction and moved into sleeping mode. Overall silver has been moving sideways between 15.50 USD and 18.50 USD during the last 4 years. 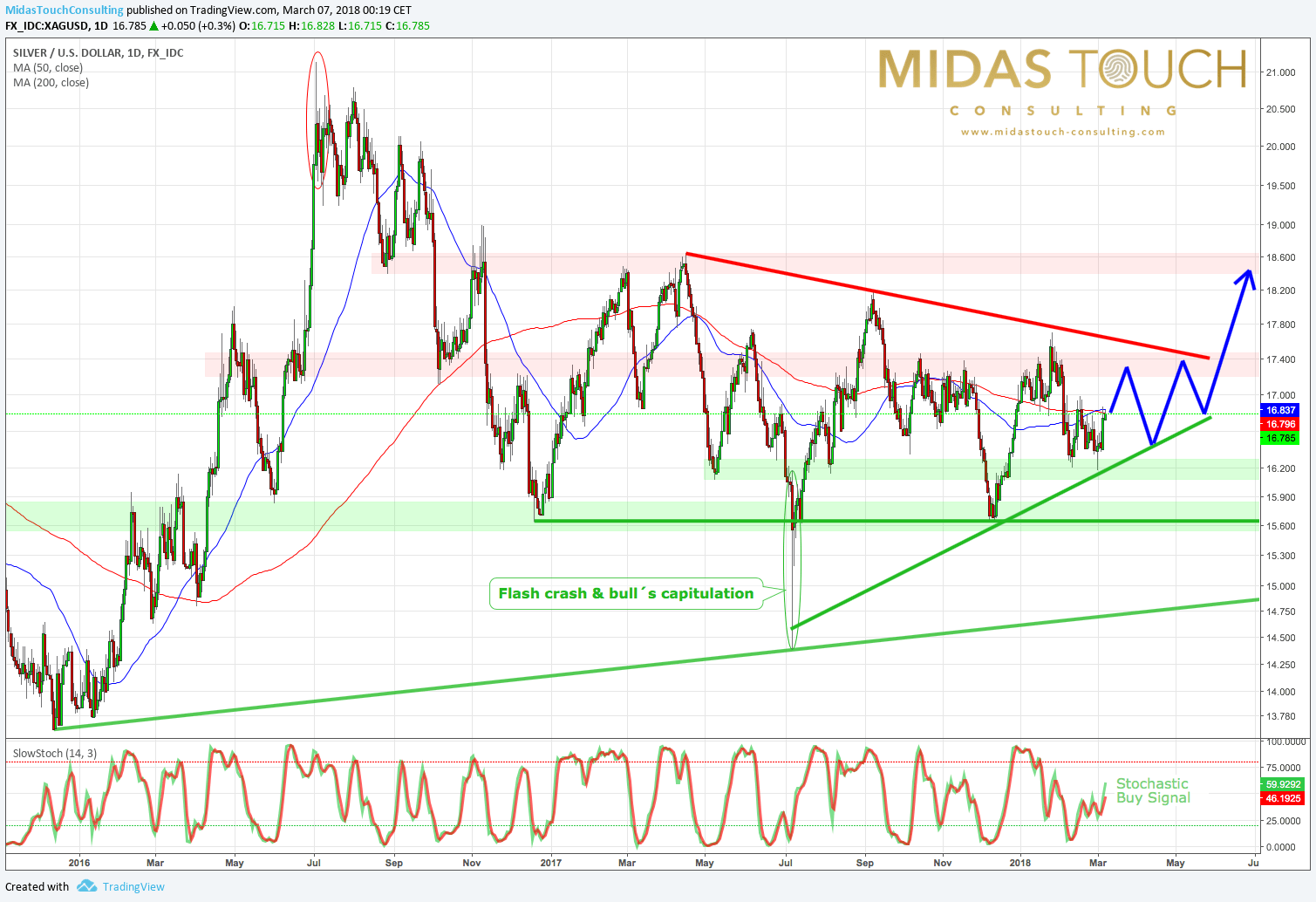 On the daily chart silver is in a downtrend since July 2016 and has posted a series of lower highs. At the same time the strong support zone above 15.50 USD has held numerous times. Only last summer when the silver market experienced a nasty flash crash prices fell below this crucial support on an intraday basis.

Technically if we connect the highs and lows over the last year silver seems to be running into a triangle formation. Usually triangles are a form of consolidation and can be resolved to the up- as well as to the downside. Also the breakout could still take some time and silver might just bounce back and forth between 16.20 USD and 17.50 USD as it is running into the apex of the triangle over the next two to three months.

But combining this more or less neutral picture with the very positive CoT-Report a breakout to the upside seems to be more likely and is expected to happen this summer. 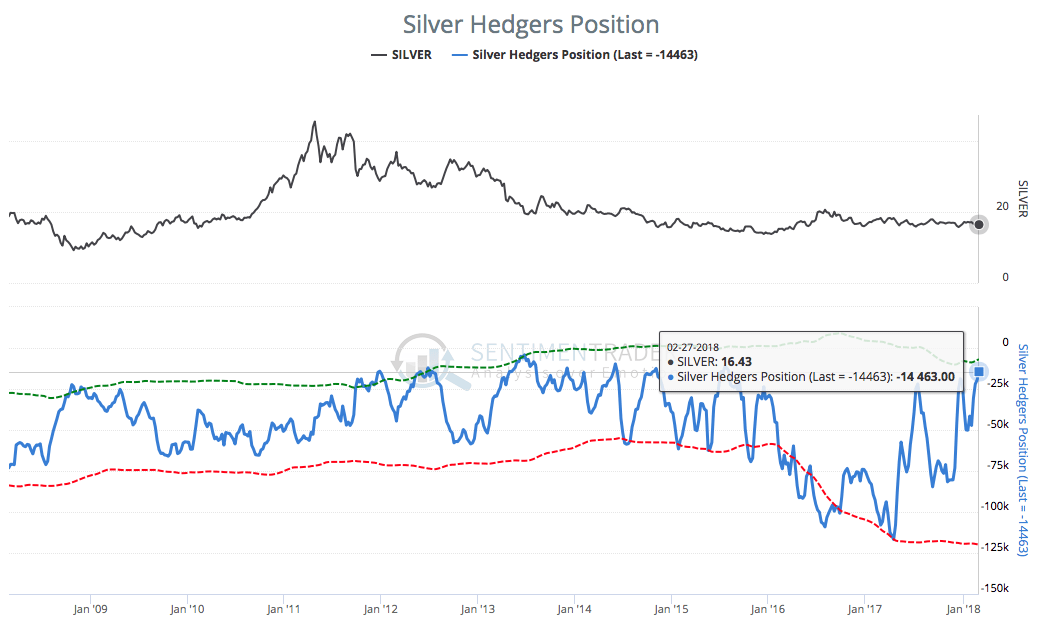 The latest CoT-Report for silver shows a very low commercial short position. With just 14,463 cumulative short contracts the professional players have no need to hedge themselves in the silver future market. At the same time the non-commercial players  (= large speculators like technical trading funds) which are basically always on the wrong side are now starting to bet on lower silver prices. This hasn’t happened in a long time and is a very promising constellation. Therefore the latest CoT-Report delivers a strong buy signal for silver!